This is topic #2 in my Brazil Travel series. If you want to start at the beginning with the intro post, you can check that out here.

It’s impossible to think of Rio de Janeiro, and Brazil as a whole, without thinking of the beaches. And seeing as how we left Colorado in December, it’s one of the parts I was most looking forward to. Here’s a picture taken the day before we flew out.

And here is the view we found after landing:

I’ve mentioned that Manaus is a port city, but what you might not have known is that it’s solely a river port. And these are river beaches. In fact, the area of the Rio Negro where we visited is the largest freshwater archipelago in the world. That’s how big the rivers are down here!

The water is full of predators, as small as bacteria or parasites, famous like the anaconda or flesh-eating piranha, large and aggressive like caimen, or dangerously stealthy like the river stingrays lurking at the bottom. In MURDERED, I mentioned that the biggest bull sharks are known to swim upriver to hunt in fresh water.

But the absolute worst thing down here is the candiru, a parasitic fish that seeks out the smell of urine and will swim up your urethra if you pee. Plus, it has barbed fins so it can’t be easily pulled back out.

So, of course, we decided to go swimming in the river.

Since my mom is probably reading this, I will say we swam by a sandbar, which is safer because the animals are attracted to vegetation and a sandbar is essentially the desert of the river. Didn’t stomp around on the bottom, didn’t wiggle my toes, didn’t swim near anything that looked like a log, and definitely didn’t pee in the river.

The real beaches, however, are those famed spots found in Rio de Janeiro.

Good luck going to Ipanema without this song in your head.

This place is a world-renowned paradise. They have a wonderful beachfront walkway, including a sepearate bike path. During peak daylight hours, the whole side of traffic nearest to the beach is closed off for pedestrian use. People walk along, tan themselves on the beach, play volleyball or soccer (or a mix of both) and generally enjoy life. It’s legal to consume alcohol in public in Rio, so many enjoy drinks on the beach as well. Check out the view for yourself:

There are, of course, a few downsides. Crowds, for one. Another biggie is the poorwater quality. According to the Associated Press, the bacteria and virus levels are about as high as swimming in raw sewage. While we saw quite a few people in the water, we skipped this swim. Remember that urethra fish? Yeah, we would rather swim around that guy than go in the ocean in Rio. A fact that is made all the more painful by how oppressively hot it is down here. And I mean hot:

So, there’s a lot of sweating involved. Yet the perfect solution is waiting for you every quarter mile in the form of snack & drink stands. The perfect treat for my money was “Coco Verde”–a green coconut split open with a machete, ready for you to plunge a straw inside and taste the sweet, cool coconut water within. The first I tried was probably one of the most refreshing experiences in my entire life. 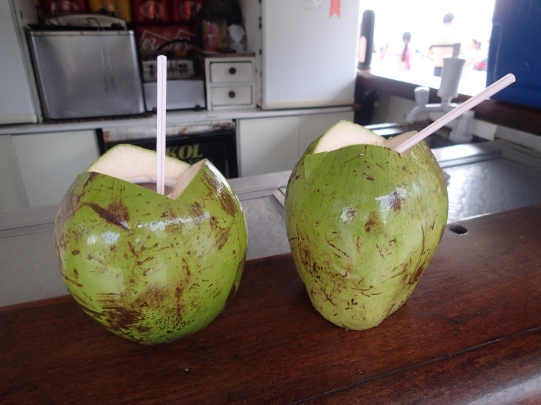 Connected just down the road from Ipanema, but if you’re not careful, you won’t even notice the transition.

Equally famed, this part of Rio does get it’s own earworm worthy song too:

During our visit, Copacabana beach was getting ready for the New Year celebration, which included some great sand castle art like the shot below:

Yet it isn’t all fun-and-games and sight-seeing. Rio can still be a dangerous city, even with the massive police crackdown that’s been going on since the World Cup and has ramped up for the Olympics. Opportunistic thieves are still prevalent in popular areas, and with so many people, the police often have to deal with violent outbreaks.

One such day, as we were walking on Ipanema beach, riot police stormed down to the shore. I couldn’t see what was going on, but a helicopter circled above with militarized police hanging out the sides, machine guns drawn.

We chose to keep walking without exploring the scene. What ever happened? I’m not sure, and I can’t find anything about it in the news either. Who knows, maybe I passed up a chance to work with Rio cops and DSS agents to try and solve a murder….

Thanks for reading! What do YOU think? Should I have swam in the ocean? What about deciding to do so in the river?

2 thoughts on “Brazil: All about the Beaches”

What do you think? Cancel reply