Today we see the river by boat. We towed along smaller watercraft to use on sightseeing expeditions, like the one you see below. Plenty of wildlife can be seen in the trees from the banks, and the river itself is teeming, so get ready for some fantastic pictures.

Overall, you get the feeling that you’re surrounded by life, but that the jungle is very shy. Animal noises echo out from the canopy, birds shriek, yet it’s difficult to spot just who you’re hearing. The trees will stand still–the jungle an unbroken curtain–until suddenly, it’s not.

When you travel by riverboat in MURDERED, your experiences are much the same:

A monkey’s ululating howl comes from somewhere in the treetops and branches sway in reaction to movement that can’t be seen from beneath the thick canopy. A nesting family of egrets calls out as a fledgling egret loses its balance and falls into the river below. The bird is quick to come to the surface but, not yet able to fly, it squawks and flails its wings in a panicked swim.
The river suddenly explodes in a cacophony of fish and churning water so powerful that the bloody spindrift hits the boat. The egret doesn’t have a chance against the piranha feeding frenzy and you watch in awestruck terror as the bird disappears in only a matter of moments.
“Do not worry; the piranha don’t eat people. They can take a finger, but he is what you need to be careful for: Caiman.”
You follow Neto’s outstretched finger toward the far bank, where a crocodilian animal at least ten feet long slips into the river and silently swims toward the commotion, which is over before it gets there.
“They eat people?” you ask.
“They drown people.”

For this reason, one of my favorite excursion-types on the riverboat Tucano was early morning Kayak. Without an engine, it made it much easier to “sneak up” on wildlife.

In fact, on one such kayak trip, we saw something swimming in the water…

It seemed we spooked it, because it started away from us at a high speed. We tried to catch up to get a better look…

That’s when we realized just who’d we had been chasing….

The guide later informed us that the caiman we saw was probably 4 meters long, or roughly as long as our kayak!

Bring a good pair of binoculars.

If you ever decide to take a trip like this one, make sure you have some way to see the shore from the boat. We got some great views from our binoculars, but check out what our new friend Jerry caught through his camera lens.

Now the hunter becomes the hunted.

The caiman may be the most dangerous animal in the river for people, but this powerful saurian is far from king of the river. That title goes to the “water jaguar” — the giant river otter. Not quite as big as a seal, these guys owned the waterways and they knew it. When we approached with our cameras, they responded by showing off their teeth.

Here are some of the amazing shots captured by Jerry Peek: 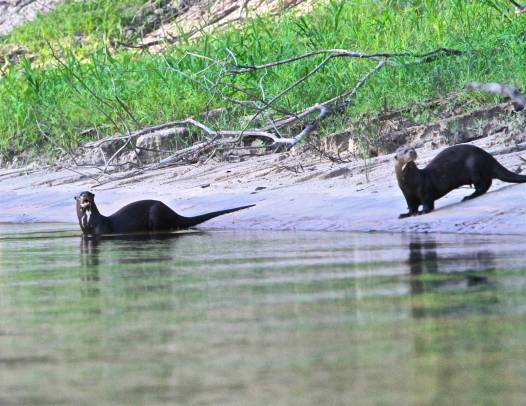 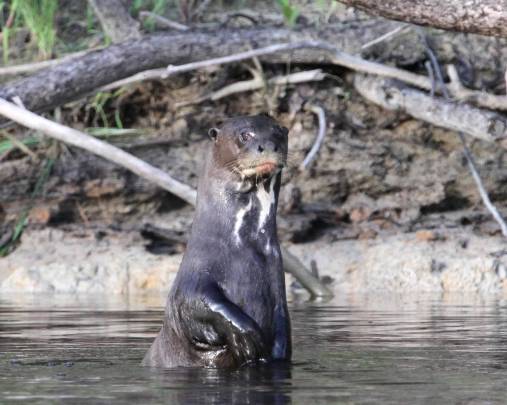 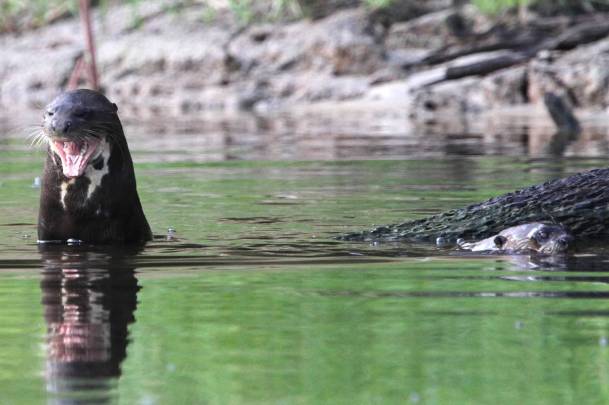 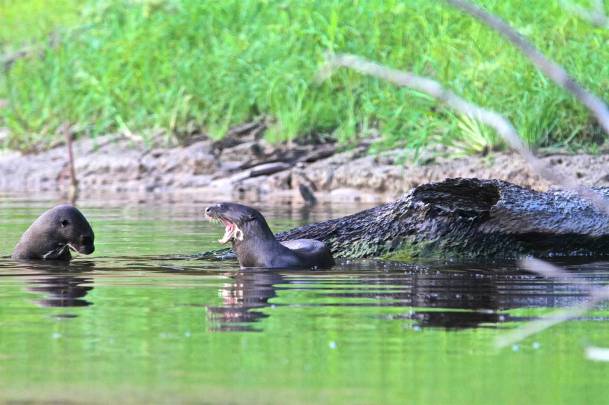 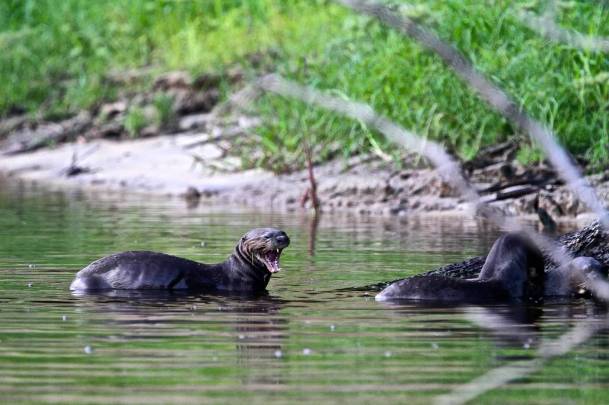 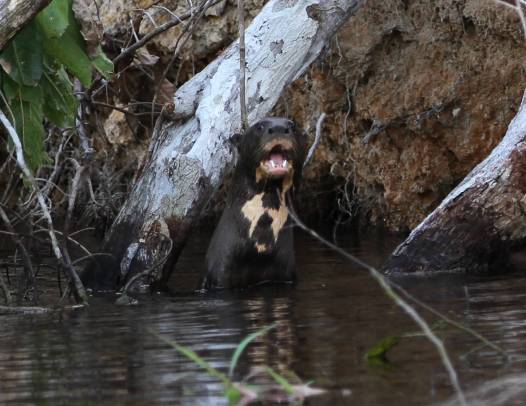 I actually saw a few river otters tangle with a caiman. The otters swarmed around the caiman in the water, nipping at the crocodilian’s tail until the caiman burst forth from the water, its legs practically windmilling as it sprinted ashore for safety. The whole thing happened so fast that my camera wasn’t able to capture the moment, but I did find a video of a similar situation online. It’s from “Plizzanet Earth” narrated by Snoop Dogg, and it’s certainly worth your time.

Click to continue to: Brazil: A River Runs Through It.

Thanks for reading! What do YOU think? Are we lucky we weren’t caiman food?