This week I cracked the 100k word milestone on the third Click Your Poison book, SUPERPOWERED. It’s happening, and soon, but every book needs a cover first.

I’m happy to announce a partnership with Brian Silveira. He’s an extremely talented comic artist, and he’s gracious enough to take a break from working on an original graphic novel to jump in and work for me. I’m crazy excited. Care to see why?

Check out our current development

Welcome to Mercury City, the metropolis where you live and work. Your home.

Here you’ll get 1 of 3 superpowers when you’re in an experiment gone awry. The other two test-subjects — will they be your allies or your sworn enemies?

Brian and I decided to give the cover a comic-book feel, even though it’s an illustration-free interactive novel.

How about some character detail?

Diamond — One of the other test subjects, Catherine Woodall, once she receives miraculous super-strength and near-indestructible levels of damage resistance.

She wears a tight, midriff-exposing black t-shirt emblazoned with a playing-card-suit red diamond logo, fingerless gloves, and black yoga pants tucked into crimson-red boots. Her face is concealed behind a red domino mask, but as she smashes through the security doors and rushes into the bank, there can be little doubt in your mind as to who this superpowered woman truly is.”

Computer, boot up White Ranger sequence. Prepare for Stark battle-mode.” “Dorian White voice recognition accepted. Beginning Techno-zord protocol,” a disembodied voice with a filtered, British accent replies. A panel behind one of the walls opens to reveal an enormous, ten-foot tall mechanized suit. It’s glittering white, with the sheen of a brand new sports car. Nick climbs inside and the armored computer closes around him, booting up. The limbs move as part of a systems check, and two more arms swing out over the shoulders—though these prove to be more cannons and less appendages. “All systems online,” a flitered, robo-Nick says. “Let’s go kick some ass.”

DinoSkin Mark IV — next generation bodyarmor. When you’re the flying-telekinetic, you can find this suit. 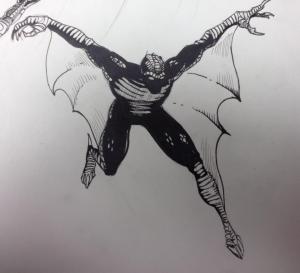 “Too expensive to be put into combat on a mass scale, but nothing else comes close. Lightweight, breathable, and incredibly durable. The scaling provides multilayer protection against gunshots or knife attack. Go ahead, touch it.” The material stretches when you tug at it, but it’s coarse to the touch. Droakam raps his knuckles against the mannequin’s torso. “A reinforced plate on the chest and spine provide added shock protection against explosives. But the best part? You should still be able to fly around in this thing because it’s so lightweight.” “Maybe your superhero name could be Terror-dactyl,” Nick snarks.

There are dozens of variations on costumed characters/personas in the book, so this is just a sampling for the cover. And, as you can see, the cover art is still a work in progress. I’ll definitely post more updates as Brian continues to work, so don’t forget to subscribe! (little box over there on the left, where you’ll never find any spam).

What do YOU think? Are you getting excited? Ready to save the world? Or perhaps enslave it…? Let me know in the comments at the bottom!

Today, Batman turned 75 years old. The Caped Crusader’s impact on pop culture is undeniable, especially as one of the few “everyman” superheroes that can stand their ground amongst those who might otherwise seem like gods.

In honor of the Dark Knight’s birthday, I wanted to share an update on my own cape & cowl project, SUPERPOWERED. As the third Click Your Poison book, you’ll be Mercury City’s scourge or it’s redemption with your own set of super-human abilities. After a move to the Denver metro area, writing life has been a bit hectic, but I’m back chasing criminals down dark alleys and inventing new ways to take over the world. Right now I’m looking at a fall/winter release.

How about a birthday present? Below you’ll find a raw and unedited sample of SUPERPOWERED where you’re able to save a damsel in distress just like good ‘ol Bruce Wayne himself. Minor Spoilers follow, in that it reveals a bit about one of the three powers you can inherit in the book. This comes from a scene where you’re playing darts at a bar, right after you discover you’re able to affect the darts’ trajectory with the power of your mind…

…a crash from behind draws your attention back to the bar. There’s a couple deep in argument, and a broken pint glass on the floor. It’s the girl from the shuffleboard table and a man who must’ve arrived just after you.

“C’mon,” the man says, just before clamping a meaty hand on her bicep.

“You’re drunk and embarrassing yourself. Shut up!” he continues, trying to pull her away. Despite his accusation, it’s he that’s slurring his words.

“Leave her alone,” you find yourself saying.

The whole bar stops to look at you.

“You—you heard what I said, and I suggest you go now if you don’t want any trouble.”

Despite the man’s imposing size and his dock worker’s strength, you’re feeling confident. The man pushes the woman off to the side, then steps towards you. It’s obvious from his body language that the time for talk has passed.

He brings a fist the size of your head in towards you and you duck in for an uppercut to his abdomen.

Here’s what would have happened before you got your powers: Your blow lands harmlessly against his barrel chest, while his own strike connects to the side of your head. He then proceeds to beat you senselessly while everyone watches, thinking, that’s why you don’t get involved. If you’re lucky, the bartender will tell him that’s enough and he’ll drag his woman from the bar, leaving you bloodied on the floor.

Now here’s what actually happens: You use the same blend of physical and psychic movements you’ve just been practicing with the darts, except now you don’t hold back. Your fist connects with his ribcage, and then your mind blasts him away, sending the hulking man over the bartop and smashing against the shelf of alcohol. You just knocked him back fifteen feet, most likely shattering his ribs and possibly collapsing a lung.

“Are you okay?” you ask the woman.

She nods, terrified. Tears and mucous stream past her tremulous lips.

You look around the rest of the bar and all the patrons shrink away from your gaze. The bartender puts a shot on the counter for you and says, “On the house.”

Like a boss, you down the alcohol, give the man a knowing nod of thanks, and leave the bar.

Go back and sleep it off.

Just a small sample, but I hope you like it! For now, I must go seek fear and injustice in the night. Happy Batman Day!