Looks like it’s a tradition now. First, I offer up my favorite reads of the year. Then, I offer to sign some of my books for you. Which is what’s happening now. 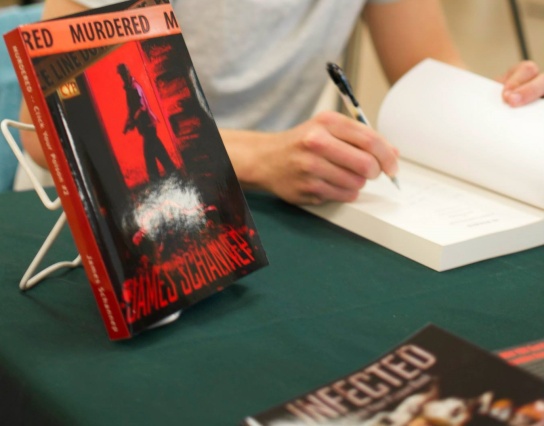 If you’re interested, I’ll sign and ship to you, a friend, family, co-worker, Secret Santa, whoever or wherever. Call it $20 even and I’ll pay for shipping. I’m limited to what I have on hand, so it’s first-come first-served until they’re gone. All three books, same deal. Because flat rate envelopes are where it’s at, unfortunately, I cannot combine shipping costs.

Hit me up on my contact form and we can iron out the payment details over email. I’m going on vacation the second half of December (more on that later — this is going to be a HUGE trip with relevance to Click Your Poison!), so I need all orders in before the 15th of December.

I usually reserve signed books for in-person appearances, so this is a once-a-year opportunity to get me to scribble for you via the internet.

Yesterday I was back at my old stomping grounds for a signing at what must be my most supportive bookstore, Hastings in Killeen, TX. How’d it go? Let’s review.

Come get a signed book and a high-five at @goHastings in #Killeen Texas! #booksigninglive pic.twitter.com/15rqFIvi2S

Only one fan cashed in on a high-five, kind of disappointing. I did, however, sign my first book withing five minutes of setting up (from a fan who had been to both of my other Hastings signings). Off to a good start.

Mystery I’d like to crack: MURDERED always does well in person, but is my red-covered step-child online. #booksigninglive — James Schannep (@JamesSchannep) August 8, 2015

Seriously. I signed more copies of MURDERED than INFECTED yesterday and my zombies always overwhelm my mystery in the sales ranking. What am I doing wrong online that I’m doing right in person?

I’m too polite to say so in person, but whenever someone tells me they don’t read, I can’t help but think they’re confessing illiteracy. One guy even said, “Reading is against my religion.” Counterpoint? As a wise man once said, “The man who does not read has no advantage over the man who cannot read.” (Mark Twain)

My nephew holding a book he’s not yet allowed to read (it’s at least PG-13, says the guy who doesn’t have kids). Still, those are real smiles!

My favorite are people who go out of their way to avoid eye contact. Look out, books are contagious! #booksigninglive — James Schannep (@JamesSchannep) August 8, 2015

And then, of course, you have the other end of the spectrum. The people who make me feel like I’m hocking a sham-wow or something. Pro-tip: Be polite, say hello, and keep walking. Or, if you stop by and aren’t interested, just say “good luck with it” and be on your way. I understand not every person on the planet will love my books.

This has been a much-needed “shut the eff up” for all those voices of doubt that plague us writerly types. #booksigninglive

It’s a roller coaster, with massive ups and downs. Yesterday was an “Up.” ‘Nuff said. 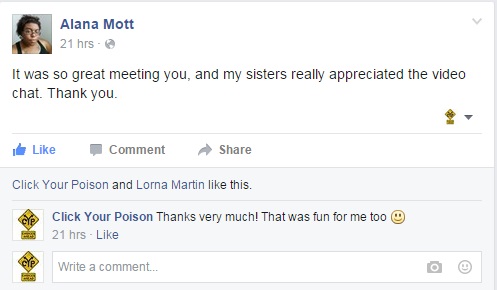 Talk about a fun experience. I was introduced via webcam because a pair of fans wanted to “meet” me! I don’t have much experience with people “fanning out” but it’s certainly welcome. I spend a *lot* of time sitting alone with my imagination, so it’s good to remind myself that I don’t exist in a vacuum.

Wearing a comic book t-shirt? Come check this out. Hey, kid in the zombie tuxuedo! I’ve got something you should read. Still, the nice lady in the American flag shorts with (another) American flag on her tanktop bought all three books, so you never can tell.

So thats probably the coolest thing anyones ever wrote in a book @JamesSchannep pic.twitter.com/ZG1awGJR4M

I’ve got a lot to live up to if Mark Hamill is any example of autographing done right. Glad to see my nerdy scribblings are appreciated!

All in all, a banner day. Thanks for showing me a great time, Killeen! #booksigning pic.twitter.com/BG0KI4Iadv

And there you have it, ladies and germs. Until next time! Maybe with a new book to show off?

The earlier blog entry on my favorite books of 2014 got me thinking. I may not have a new book out this year for the holidays, but I do have a few extra copies of INFECTED and MURDERED lying around.

If you’re interested, I’ll sign and ship to you, a friend, family, co-worker, Secret Santa, whoever or wherever. Call it $20 even and I’ll pay for shipping. I’m limited to what I have on hand, so it’s first-come first-served until they’re gone.

Hit me up on my contact form and we can iron out the payment details over email. Priority mail is 1-3 business days, so you’ve got a week or so to get your orders in!

I believe this makes my first “online author signing.” I usually reserve signed books for in-person appearances but you’ve caught me in a rare non-Grinch mood. Merry Christmas and Happy Holidays!