Yesterday, I announced my annual Sign & Ship deal (including my new release, MAROONED), so today I wanted to list some other books that are worth picking up this holiday season.

This is not a critical, scholarly approach to what was released in 2018. These are my favorite reads of the last year, nothing more and nothing less. I usually read 1-2 books per month, and listen to another on audio. These titles are the ones that really stood out.

Here they are, in no particular order:

Be Prepared by by Gary Greenberg & Jeannie Hayden. Yep, big life change happening this year — I’m going to be a dad in 2019. This book uses humor and wit to help inform a father-to-be while combating thoughts of “What am I doing?! I’m not ready for this!” and replacing those fears with something that’s starting to resemble confidence.

Stories of Your Life and Others by Ted Chiang. The paperback I found had been rechristened Arrival after the titular story was turned into a Hollywood movie, and I didn’t quite realize what I was picking up when I decided to check this short story collection out. But I’m glad I did. It’s an eclectic bit of storytelling, but each story makes you think about the world in a different way, which is the acme of storytelling, IMO.

The Serpent’s Fang by Ryan Mullaney. Ryan is another self-published writer I discovered through online writer communities. This book is the start to a Tomb Raider-esque series about a female treasure hunter and makes for a fast-paced light read. If you like “popcorn fiction” maybe give it a go.

Steam Highwayman by Martin Noutch. I met Martin when he was still working on his debut gamebook (Interactive Fiction is a small community), and I’ve had the pleasure of watching the start to his publishing career unfold. This book leans heavily on the “game” side when compared to my own series, but if you like rolling dice and keeping stats with pencil and paper, then I’d suggest grabbing a copy. Immersive story and expansive worldbuilding make for many, many hours of play.

Who Goes There? by John W. Campbell, Jr. This novella is the basis for the movie The Thing and was a treat to listen to for someone who has written both prose and screenplays. I had a vision in my head from the film, which made it fun to experience in reverse as the original 1938 story. Quite visionary and ahead of its time for early 20th century sci-fi. 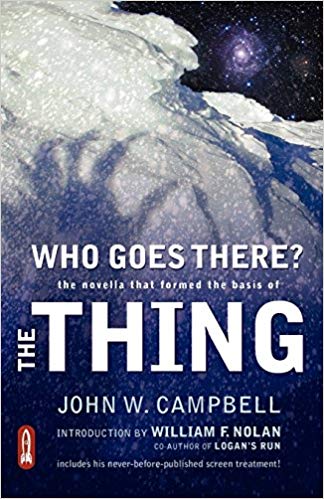 That’s it! What about you? Read anything good this year? Any book recommendations for me? Let me know in the comments below, and don’t forget to check out my annual Sign & Ship deal before it disappears for another year!

Happy Holidays! If you’re interested, I’d love to scribble on some dead trees for you. Now, that may seem strange, but I only do this event once per year. Otherwise you have to (or, I suppose, “get to”?) see me in person if you want a signed book.

Classically MAROONED is still underway, full sail ahead, as it were. I’ve hit nearly 50,000 words and I’ve all but completed the intro and one of the three main storylines. Sadly, that book will not be available for Christmas, but all four of my other Click Your Poison titles are ready for signing and shipping!

Whatever you are or are not celebrating (Festivus? A coincidental birthday? The fact that the sky didn’t fall in 2017?), this is the perfect gift for your favorite reader (who, technically, can just be you). Let’s call it 20 schmeckles to sign and ship a book.

Hit me up on my contact page for more info and Happy Merry!

Last month after I finished the first draft of PATHOGENS, I sent out a call for Beta Readers.

Well, my edits are complete and the book is ready for feedback! If you already volunteered, your character is waiting for you in your inbox.

Want to get in on the action? It’s not too late! Hit me up on my contact form. All you have to do is send me your top three preferences for which character you’d like to read. You’ll find a short description of each character in PATHOGENS below.

PS — If you’re not into feedback, here’s your update: PATHOGENS should be in your hands sometime in August or September!

Technical Sergeant Robert Sims, National Guardsman and electrician in the greatest Air Force in the goddamned world. Divorced, no kids, fourteen years of service given to your nation thus far. You’re a “Prepper” (a dedicated survivalist), and you’ve been looking forward to the zombie apocalypse for as long as you can remember. Your unit was mobilized and now you find yourself at the tip of the spear.  When it comes to idioms you’re not the smartest crayon in the box, but you’re an electrical genius.

Kaeden Cooper, known as “Kay” to your friends. Daughter of a NASCAR driver who turned to the bottle and lost his shot at stardom. You’ve since done your fair share of racing on the motorbike circuit, but it’s still very much a man’s world, and no one wanted to give you sponsorship unless you posed by the bike in a bikini. Instead, you turn wrenches for a living, working for the weekend until you can ride again. Little do you know that this shift under the hood will be your last. Soon the world will learn it’s those who know how to change their own oil that will survive.

Work nights at the call center, days at the bank. Sleep? Yeah, right. It’s all you can do to provide for you and Mama, who lost her own job in the recession. She still hopes you’ll find a nice girl and settle down, but you’d settle for an apartment in the better part of town. So you use any spare moment; while eating, even while shitting, to take online courses on a smartphone, angling for a promotion at the bank. But all that effort is about to be in vain when the global economy tanks in 3, 2, 1…

Smart, cute, spunky redhead. 17-year-old high school student. Your father is a combat-veteran Marine and you work weekends at the family-owned shooting range. Sarah is your real name and truth be told, you’re more interested in boys and music than you are bug-out-bags and MREs, but you play along for dad’s sake. Ever since mom died he’s had a hard time and he’s not the type to get a pedicure so for quality time you learn about pyrotechnics. Unfortunately, Sarah’s world is about to end and you’ll have to fully embrace his training to become the “Rosie the Riveter” of the apocalyptic wasteland.

Lucas Tesshu, middle aged man who handles crisis with the same serenity a stone handles the river. As a child of Japanese immigrants, you’ve lived much of your life as an outsider, making solitude a revered mentor and friend. As a Kendo instructor and master of swordplay, you’re more than capable of defending yourself, but as a disciple of Bushido, you are committed to helping those in need. So the question becomes: Can a man unable to leave someone for dead still survive the Zombie Apocalypse?

Poor as dirt, good ole southern boy. Thin as a rail, and yeah, the nickname is ironic. Known to the State as inmate #: 080620-06. They say money doesn’t grow on trees, but you can cook some up in your kitchen using a few household ingredients as fertilizer. Like literal fertilizer, for one. But you’re over that now, clean, back on the straight and narrow, and ready to be a productive member of society once you get released from the Big House. Which is about to come early, courtesy of the Apocalypse.

Thanks for reading! Excited? Ready to start reading?

The horde grows! Yesterday my website crossed into 10,000 views and I just wanted to say a big THANK YOU to all my faithful readers. You guys make it all worth the while.

That’s it! Back to work.

Recently, I was paid my highest compliment as a writer to date. I was told by a reader, “Your book got me through Hurricane Sandy.”

Wow, huge. I’m not sure there’s any greater calling for fiction. If there are three goals for entertainment I see them as: 1) Help escape the dreary or the mundane, 2) Inspire & foster creativity, and 3) Teach us something about the world. I’m honored to have met #1 for at least one reader.

To say, “Thanks!” to all my readers, I’m hosting a giveaway before INFECTED releases in paperback this Thanksgiving. Less than 1.5 days left to enter! And in the Holiday spirit, share share share this link: a Rafflecopter giveaway

Okay, maybe it won’t really save you. Unless the zombie apocalypse happens just as described. But in that case, you’re welcome.